For a while now, the boys have been eyeing off a selection of superheroes in my miniatures cabinet. I painted them ages ago, but they haven't seen action in for a long while. Anyway, we dragged them out for a game of Pulp Alley, super style! 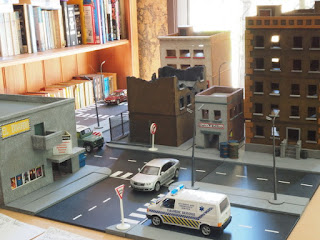 At 10am this morning, a tenement in downtown Corkville went up. Firefighters were on the scene quickly and but struggled to extinguish the blaze. They and police were investigating when a strange device began emitting ear-piercing sonic pulses. The police rapidly evacuated everyone in the area. Meanwhile, no less than three separate heroic HQs picked up the pulses: tell-tale signs of a rare and powerful cosmic device, an Infinity Thingy. Each super-heroic squad is determined to be the first to grab the Thingy. In addition, they'll be looking for evidence as to who left the device here.

The boys made up their own leagues, but I can't remember what they named them, so I'll provide my own! The Glorious People's Revolutionary Vanguard Movement. Microspy (ally), the Siberian (terror!) and Commissar Grigorivich (sidekick). 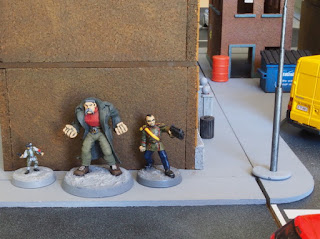 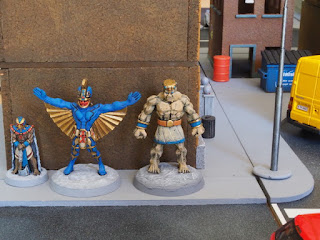 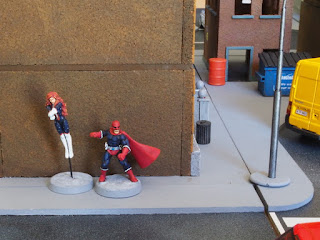 The Infinity Thingy in the middle of the ruined building. 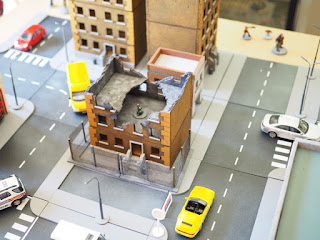 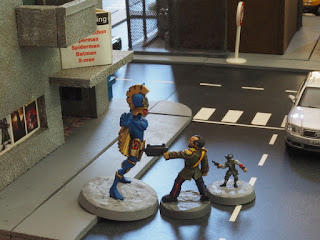 Pick on someone your own size! 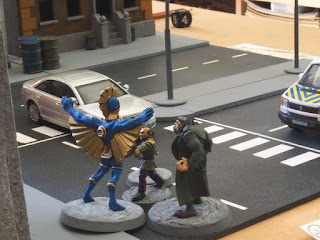 Meanwhile, Osiris and Pillar make for the Infinity Thingy. 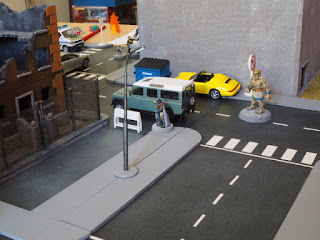 The Guardians are headed for the same objective. 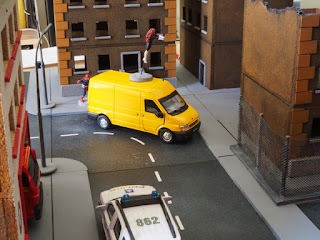 Checking for clues. Microspy scruffles in the dumpster, while Nightwatch cases the crates. 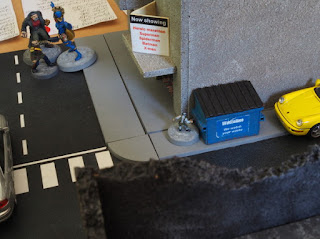 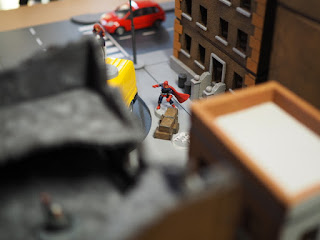 Ra and the Siberian continue to trade blows, while Pillar attempts to stomp on Microspy. 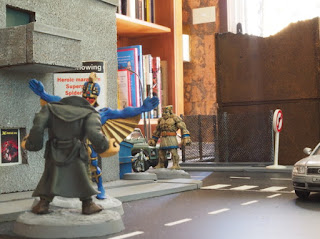 Meanwhile, someone actually remembers what the main objective is. The two flyers swoop on the Infinity Thingy. 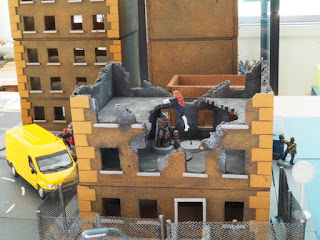 Starstrike takes care of Osiris and avoids the attentions of Ra (shoo! shoo!). The Infinity Thingy is hers! 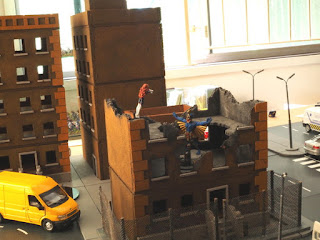 A fun game, but I think some mods will be in order for next time. In particular, I think a knockback rule would be useful (I remember this from my Supersystem days). Perhaps: For every hit you land on your opponent above the first, they are driven back x inches.  I think this would introduce some more dynamism into the brawls. They did tend to lock down a bit in this game. The boys tend to flit from thing to thing, so it might be a while before I get to try that out!
Posted by Preacher by day at 2:25 PM 10 comments: