Sun, Sand, and Savage Creatures from Another Dimension - a Pulp Alley Game

With our Pulp Alley sci fi campaign done, we're pressing on with new things at the club. Rhys volunteered to run a Cthulhu campaign for us. This game was quite the novelty for me: I think it was the first time I've played a game of Pulp Alley that I wasn't running. It made a nice change!

An ancient evil is rising and we need to stop it. A set of seals are crucial to that task. We're all here in the village of Ash-Shatt to find the seals. I ran the tramp steamer crew, Mark took the mad scientist and Andrew ran his rocket troopers. Rhys was in charge of the nasties (which he did a lovely job painting). 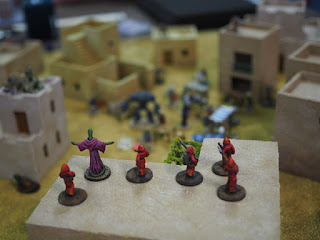 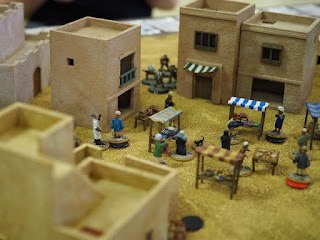 As he does, an unearthly piping begins. Ever character must pass a challenge when they activate, or all they can do is move towards the piper! 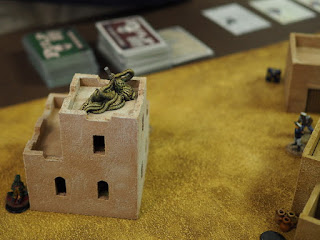 My league, the tramp steamer crew, decide they quite like the sound of pipes! 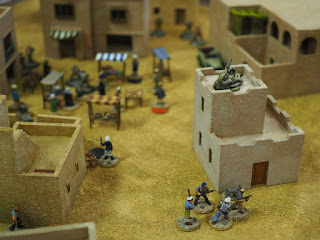 When the next seal is grabbed, a snakeman and his cultists appear! 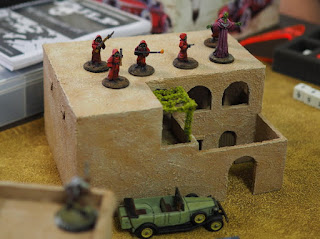 While we're still trying to deal with snakemen and cultists, the next seal unleashes a hideous tentacle. 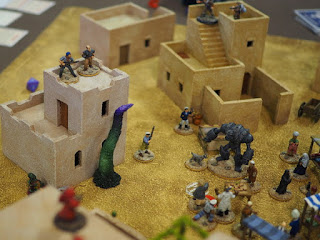 Amidst the chaos, Dr Veruckthaar manages to grab the major plot point, unleashing an unspeakable terror! 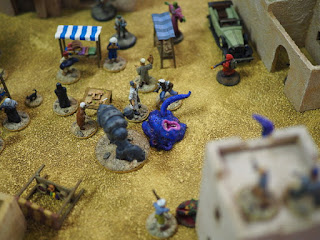 By the end of the game we were still dealing with cultists and tentacles and squishy things, but we had only managed to grab four out of five seals. Mark won, with the major and a minor plot point to his name. Andrew and I snagged a minor plot point each. Rhys was a bit bewildered at our enthusiasm for killing each other rather than the horrors from another dimension. Are we not gamers and friends, I say?! What else would we do? 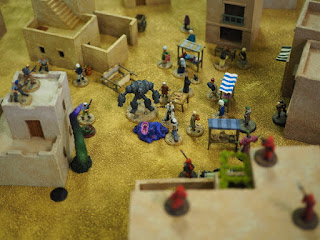 The game was lots of fun. By the end of it we were on tenterhooks every time a plot point was passed: waiting to see what fresh horrors Rhys would unleash on us.

These meetings never happen. Ask anyone who goes to them. They will tell you there is no such thing. With good reason: if people could see this, they would be beyond appalled. The Governor's right hand man, a trader, a gang patriarch, a psyker and some creepy cultist. There's no way you should find those people in one room. And so you won't. You won't, because it's my job to see that you don't. 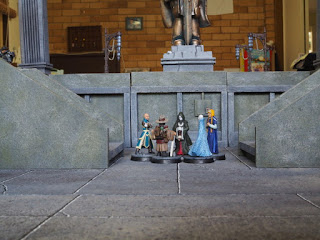 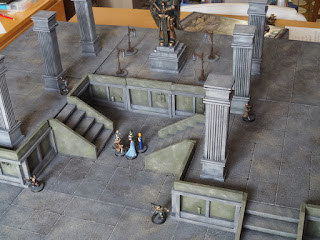 The Dark Coterie meets in out of the way places, places you wouldn't normally go. But, just in case, Petro Bolt and his three offsiders have been employed to make sure no one stumbles on them. 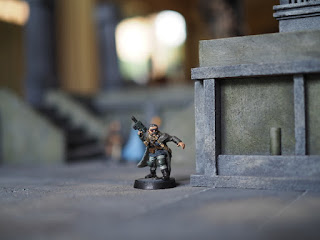 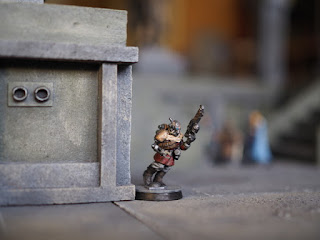 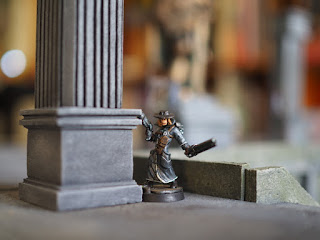 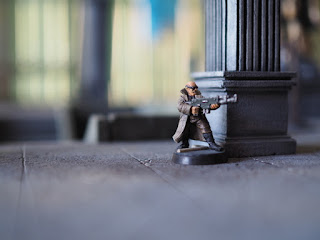 The problem is, a secret this big doesn't stay a secret forever. Today, it's not accidental visitors Bolt has to worry about. Two other gangs of mercenaries have gotten wind of this meeting, and they're keen to lay hands on Bolt's precious charges. 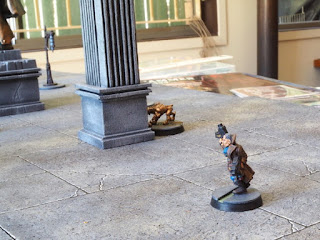 The other gang rushes Bolt, and carnage ensues. 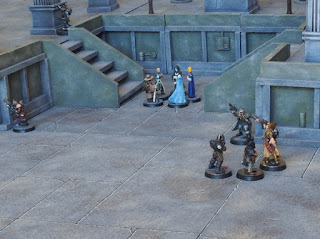 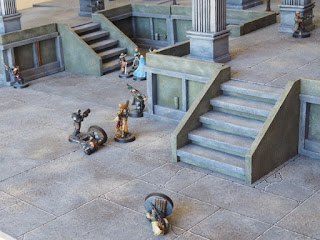 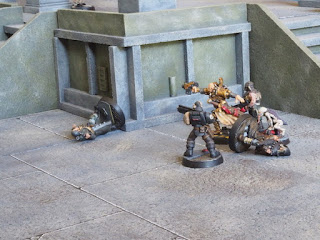 (The boys made up these gangs themselves and this one had a curious combination of figures!)

The members of the Dark Coterie scatter in panic. 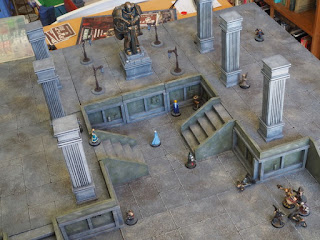 Bolt is back up (and down), as the judge moves in to grab the cultist. 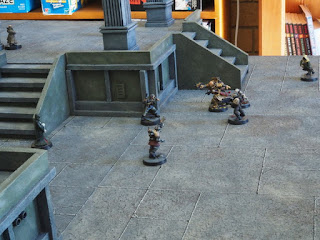 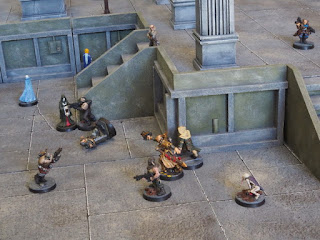 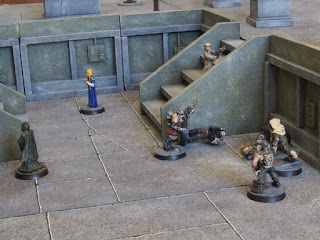 Scrooner looks to join in the fun. 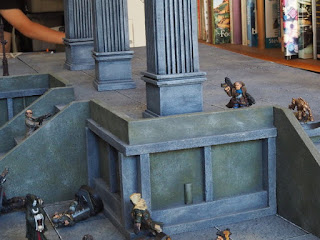 Bolt goes down and stays down. The Coterie are looking vulnerable! 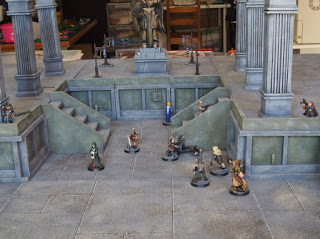 But a combination of inept rolling... 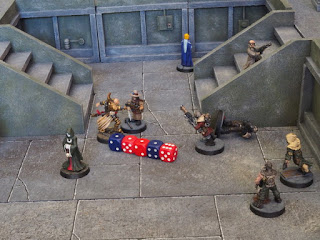 ...distraction from the main targets... 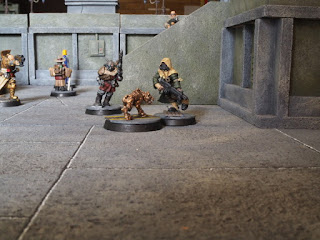 ...and spoiling moves from Bolt's men... 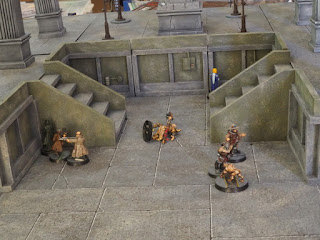 ...mean that none of the Coterie are taken!

I played this game with the two boys. As the defender, I expected to be meat in their sandwich. However, they got a little distracted beating each other up (week 2 of school holidays brings all the sibling rivalries to the surface!)

This was the first game where both boys designed their own leagues, something they really enjoyed doing.
Posted by Preacher by day at 11:44 PM 14 comments: