Here is my first unit of Red infantry for the Russian Civil War. I've worked out the basing for them, so I can show a few close-up pictures. 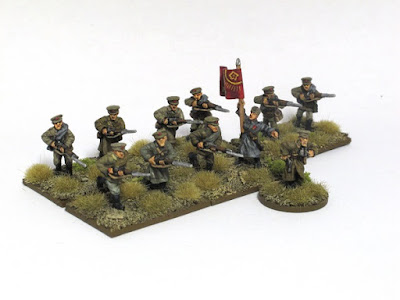 The figures are from Peter Pig's excellent range, and they're good fun to paint up. With the drab uniforms, you could finish them off quickly with a really basic paint job, but they also reward a bit more time and effort. 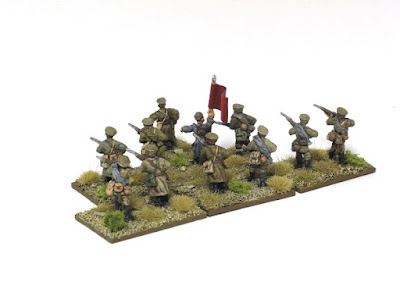 Here's the banner. It's a design I've printed from the internet then painted over. The star is a little wonky - I've since discovered a better technique that let's me get those kinds of details more precise. But you'll have to wait for the next unit to see the results! 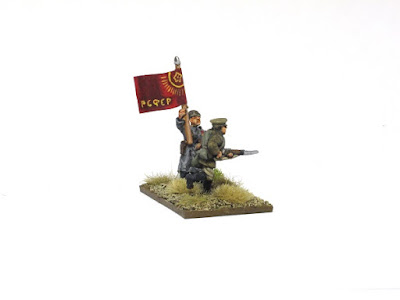 If you've been viewing the blog for a little while, you'll have noticed the backgrounds for my photos have been all over the shop. I was getting a bit sick of this, so thought I should get a better quality set up. Here it is...

A copy-paper box, with white paper sticky-taped to the insides. It's not perfect but it does alright, as the above photos show.
Posted by Preacher by day at 10:09 PM 1 comment:

Email ThisBlogThis!Share to TwitterShare to FacebookShare to Pinterest
Labels: RCW

They won't be much use for Saga anymore, but they will work for Lion Rampant (really, it's the fantasy version that I'm most excited about - the upcoming Dragon Rampant). 'Lion' is not as picky about getting figures into combat - if the unit fights, the whole unit fights. I will need to use casualty markers, but it will only ever be two per unit and then you take off a stand. The other nice thing is that units drop in Combat ability once they're reduced to half strength - that translates neatly to losing one or two stands depending on the size of the unit. 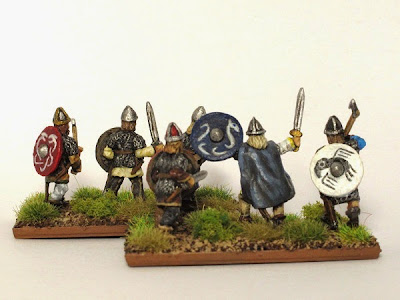 I reckon that 15mm is the ideal scale for these kinds of games. Because the figures don't fight as individuals, its OK that they don't have the personality of 28mm figures. Besides, they're cheaper, quicker to paint, and don't takes as much room for a game (all important considerations for me).

The Vikings, by the way, are from Khurasan Miniatures.
Posted by Preacher by day at 9:47 PM No comments:

I picked up some columns for my sci fi games. These are high density foam, produced by Blue Forge Terrain. The columns come six to a pack and I bought a pack of normal columns and a pack of ruined columns at $15 a set. You can see from the shots that they're substantial pieces. They come undercoated, which speeds up the painting process nicely. 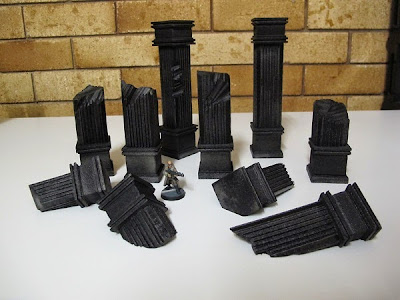 Because they're foam, and they're tall, it's pretty easy to knock them over. To counteract this, I did a bit of modifying. I cut out a hole in the bottom and shoved in a hex nut. This gives the columns enough weight stay upright after a bit of a nudge. 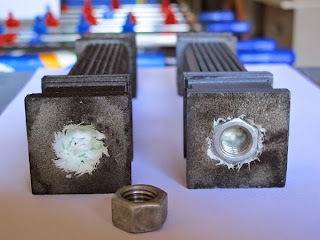 I'm really happy with them. They have a few little bits of soft detail, but they're imposing pieces and good for the price. They come up nicely. 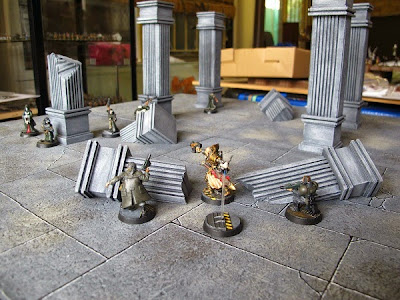 I just need to paint up a few more and I'll be ready to refight the lobby scene from the Matrix! 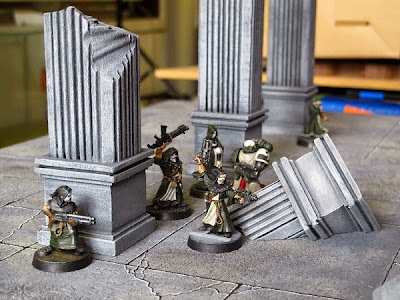 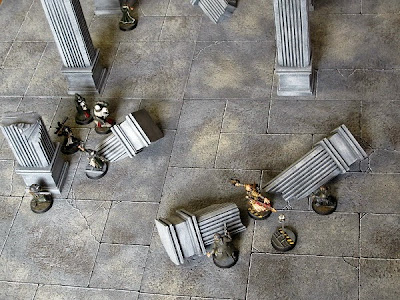 Posted by Preacher by day at 11:20 PM No comments:

A mausoleum from Games Workshop's Garden of Morr set. Easy to put together and pretty straightforward to paint, although it hasn't turned out quite as well as I'd have liked. 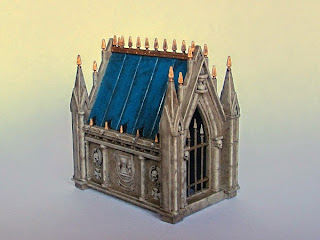 This is for my Pulp Alley meets GW Inquisitor project. I've got a few more of these in line to paint, but they're a little way back in the queue.
Posted by Preacher by day at 7:20 PM No comments:

Well, finally, my first Kickstarter. I've almost pulled the trigger a few times but caution and wisdom got the better of me. Not so this time!

The culprit? Colony 87 - sci fi civilians. Not the cheapest miniatures, but these are the perfect extras for Pulp Alley games. I can already see a number of scenarios forming around these characters.

Now, as long as they don't do a Dust or a Defiance Games or a Sedition Wars or a Kingdom Death or a Games and Gears or a Mercs: Recon on me!
Posted by Preacher by day at 4:54 PM No comments:

I started painting for a new project this year, and got the first game in today. Russian Civil War and the back of beyond. 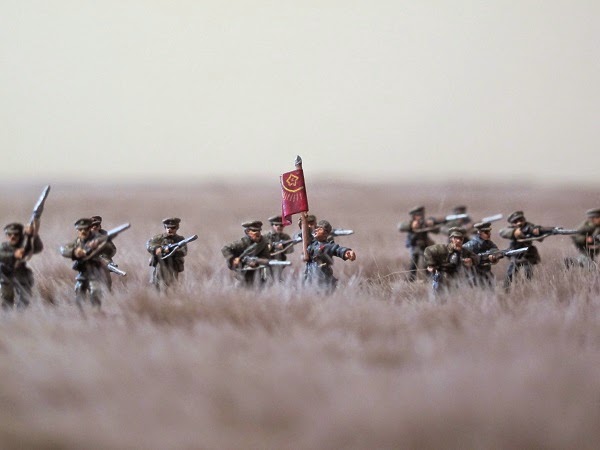 Andrew and I had our first experimental game. We used cardboard pieces, so no in-game shots here. These are the guys I've painted so far, along with some untreated teddy bear fur purchased for the project. 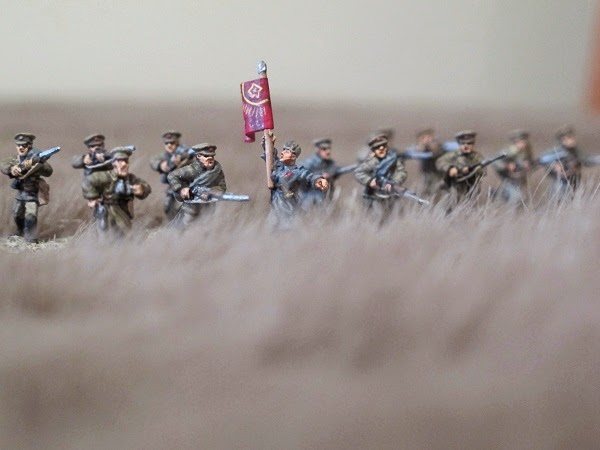 The figures are 15mm, from Peter Pig's wonderful range for the period. 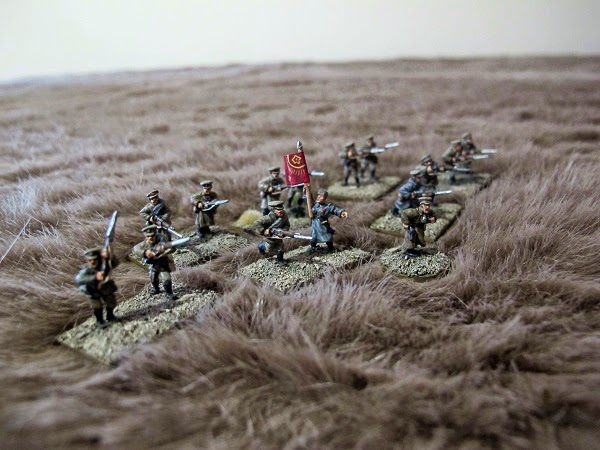 We used the Red Actions rules. They're free, although the authors encourage a donation if you like them. We found the rules really interesting. It's hard to kill anything. Units will more often be pushed back and break as a result of poor morale. The push-backs can really break up an assault.

We used just three infantry units, an MG unit and a field gun each and still had an interesting game. We voted them worth keeping!
Posted by Preacher by day at 11:25 PM 4 comments: